Cashing in on Desa Kudalari

MATURE rain trees, palms and other tropical greenery form a shield around the Desa Kudalari, a condominium project on sprawling grounds within view of the Petronas Twin Towers.

Planted more than 30 years ago, they oversee the place like some jealous guardians of the gardens. But the last couple of years, there has been quite a bit of chatter about owners selling their units en masse.

Desa Kudalari was built more than 30 years ago by Tan & Tan Developments Bhd. It was Malaysia’s first condominium. It was also the only low density condominium project in the city centre with large green open space. A total of 186 units, five blocks of three-storey walk-up units and a 19-storey block, share the grounds with squirrels and other small animals.

Over the years, other newer buildings came up around it even as the mature greenery spread its branches further over the area, creating a cocoon-like environment around the 7.35 acres. There is Menara Tan & Tan on one side, a spanking new condominium on the other and as one enjoys the grounds, Menara Tabung Haji looms tall next door in another part of the garden.

Not only have neighbouring buildings rose up around it, but the vehicular traffic have also increased many times over the years. But despite the noise and hustle beyond its perimeters, the intrusion is muted by the green buffer. After one passes the security check, city life is left behind.

That serene and idyllic surroundings may change, however.

Over the last one year, some of the owners have mulled over the prospect of selling their units en masse, which is different from an en bloc sale. To sell en bloc means all the owners are saying “yes”.

In the case of an en masse sale, some are saying “no”.

Unlike Singapore, there is legislature to provide for en bloc sales. According to a Singapore Straits Times report, as long as 80% of owners give the nod, it is a done deal. However, in Malaysia, as long as one owner unit holds out, there is no deal.

About a year or more ago, a pro-tem committee was set up to oversee this and property consultancy CH Williams Talhar & Wong (WTW) entered the scene. Two surveys were conducted. The second showed that 90% were willing to say yes, 10% nay. 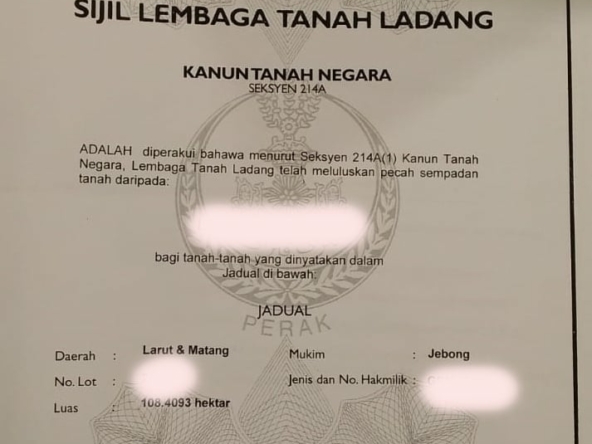 How to subdivide a 100 acres land

If you are looking at very old jpph data for RPGT valuation, you might contact...
Continue reading
by moderator

Please enter your username or email address. You will receive a link to create a new password via email.